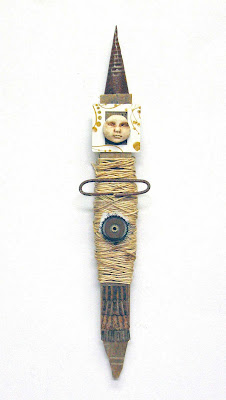 Winter Fair this past weekend was a very nice and sold a few items. I also got to meet the person who purchased my brick doll from the breast cancer auction.  I had mentioned that to my hubby last week that I had no idea who bought the brick, so that was a bit exciting!!  Winter Fair is juried fine art show and I am making plans to apply for a spot next year. This year I showed with a group of fellow doll makers as a guild on the upper level of the convention center and the juried artists were all on the first level. Several guilds are allowed in on the upper level as long as you demo your craft for the public.
Jewel was created from a wooden stake used at a construction site and the string was still on it when I scavanged it somewhere. I originally left the white frame around the face plain white, but that kept bothering me, so I added some design marks to it and now I'm somewhat satisfied with the results.
Posted by Carla Trujillo at 7:55 AM

The frame around her face is wonderful with the design marks. Love her.
Congrats on a successful fair. Always a good thing.